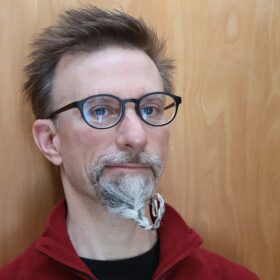 Geefwee Boedoe began his animation career working as a hand-drawn animator for Walt Disney studios on The Little Mermaid, and Beauty and the Beast, and started work in story & visual development on The Hunchback of Notre Dame. He continued in story & visual development at Pixar on films such as A Bug’s Life,  Finding Nemo and The Incredibles. During his work on Monsters, Inc. he also designed and created the title sequence for that film.

In 2002 Geefwee Boedoe left the studio environment to pursue personal work. The first fruit from his independent path was the publication of Arrowville, a children’s book he wrote and illustrated which was named a Ten Best Illustrated Children’s Book by the  New York Times, and won the Best Illustrated Book of the Year from the National Cartoonist Society. In 2011 Geefwee Boedoe’s independent short film Let’s Pollute, which he wrote and animated, was nominated for an Academy Award.

During his many personal projects Geefwee Boedoe has also continued to work as a freelance vis-dev artist, contributing character designs, environments and concept art for many of the major animation studios including, DreamWorks, Laika, and RealFX on films such as How to Train Your Dragon, Free Birds, and Boss Baby, to name a few.

Currently Geefwee Boedoe lives in the San Francisco Bay Area and is teaching Character Design at the California College of the Arts. He is also developing several original independent stories including an animated television series, between his freelance design work.