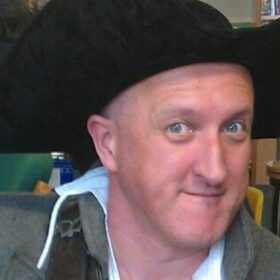 Jonny has been designing characters for game and film for thirteen years and is an award winning concept artist and illustrator, based in the UK. After working on a pirate ship for a year, and as an art teacher in the Kalahari desert, Jonny started working in the UK Games Industry in 1999. Over seven years, he worked in-house at some of the UK’s leading games companies, modelling characters (in Maya) for PS1 and PS2 and designing environments and characters for PS2, PS3 and XBox 360. Jonny went freelance in 2006 working with SCEE for eight months on new game concept for PS3. Jonny concentrated on children’s illustration in 2007, with covers and interior illustrations for other authors,and then his own first picture book ‘The Pirate Cruncher’. In early 2008, Jonny moved into movie character design, working for almost four years on Aardman Animation’s ‘Pirates! Band of Misfits!’ designing many of the movie’s characters, creatures and figurative background elements. Alongside the character design for Aardman, Jonny continued writing and illustrating children’s books, and his second picture book , ‘The Pirates Next Door’ was published in 2011. He’s currently working on his third book, ‘The King of Space’ due for publication in 2013.Jonny’s illustration work for Terry Pratchett’s bestseller, ‘Nation’, was shortlisted for Best Children’s Illustrated Books 2009 at the English Association Book Awards 2010. His illustrations for ‘Highway Robbery‘ by Kate Thompson won an Association of Illustrators’ silver award for children’s illustration, and his own book ‘The Pirates next Door’ recently won the Waterstones Children’s Book Prize 2012. Jonny won the Silver Award for Concept Art in Spectrum 14.